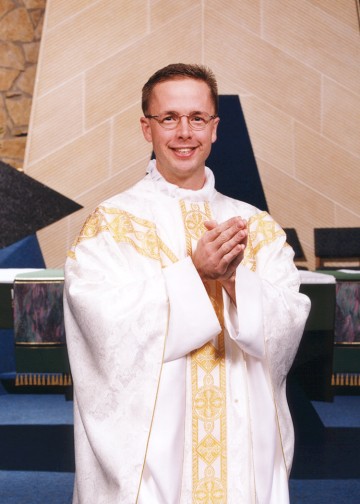 Father Darrin May was ordained on May 29, 1999 and his first assignment was here at St. Francis of Assisi as associate pastor from June 1999 until June 2001. While serving, Father May was a moderator for the CYO and PSR and chaplain for the Legion of Mary and Totus Tuus. He also participated in the parish Adult Education classes and was a chaplain to the IHM sisters at Bishop Carroll High School. Father May was the diocesan chaplain for VISIONS, and participated in Engaged Encounter retreats.

Father May had no plans to become a priest until he began Eucharistic Adoration while working in Kansas City. It was during his time before the Blessed Sacrament that he realized his vocation, which he says he owes to the Blessed Virgin Mary. When Father May began attending Mount St. Mary's seminary, it was his first experience attending a Catholic School.

Father May says that, as a member of the Catholic Church, he has experienced how "the truth shall set you free". When we are in line with Church teaching on any issue, we can see the spiritual consequences of our decisions and actions. He says we should see this as freeing and uplifting, as opposed to tying us down.

Effective July 9, 2001, Father May was assigned as chaplain at Via Christi Medical Center-St. Francis campus, Wichita. Father May wishes to thank the parishioners of St. Francis for everything, and says it was a privilege to serve in the parish.