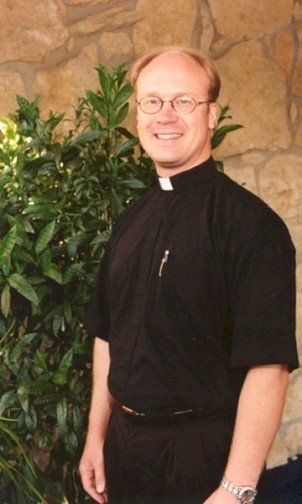 Father David Lies was ordained a priest on May 23, 1998 after studying at the Pontifical College Josephinum Seminary in Columbus, Ohio. His first assignment was back in Pittsburgh, Kansas at Our Lady of Lourdes where he spent 18 months. Father Lies spent the next six months at Blessed Sacrament here in Wichita and also taught part-time at Kapaun Mount Carmel High School. From there, he was at Holy Cross Parish in Hutchinson for two months, and then assigned here at St. Francis of Assisi Parish in the summer of 2001 until summer of 2003. Father Lies served as the Parish School of Religion coordinator, and on a diocesan continuing education committee.

Father Lies was encouraged in his vocation by the strong faith that exists in his family, and by the example of Father Vincent Eck, his childhood pastor at Christ the King. When speaking of his vocation, Father Lies says that, "The fulfillment and happiness that God has planned for us may be something we might not consider. We need to be open and God will guide us to where we will be of the most help to others."

One aspect of the Catholic Church that Father Lies feels grateful for is the way faith and reason are combined. As he puts it, "The Catholic Church is not afraid of engaging the intellect and knowledge of the world in understanding the God that created it."

Father Lies' message to you is this: "God is present in our relationships with others and the Church brings us into those relationships. Sometimes it is the unexpected ones in which God is asking us to see His presence. Community is important to our lives."