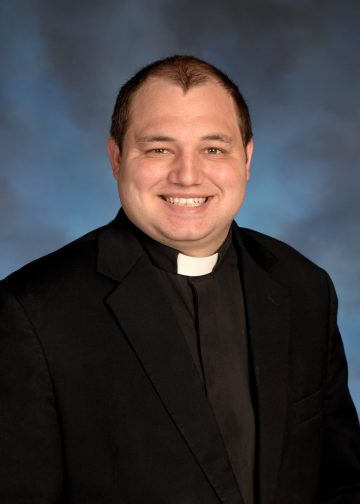 Father Maximilian K. Biltz (better known as Fr. Max) was born in Wichita Kansas on October 21st 1982. He was named after St. Maximilian Kolbe, the Polish Priest who was killed in Auschwitz. Fr. Max was born the same month as Father Kolbe's canonization which is how he got the name. He was baptized at St. Patrick's Parish in Wichita KS where he also attended Kindergarten. In 1989, his family switched parishes to All Saints where Fr. Max attended from 1st-3rd Grades. He was homeschooled during school year 93-94. He attended the (now disbanded) Juan De Padilla Academy from 94-95. In 1995 Fr. Max, aged 12, moved to Arkansas City KS with his family and became a member of Sacred Heart Parish. Fr. Max was homeschooled from then on until he finished High School the spring of 2001. In the fall of 2001 Fr. Max enrolled in Cowley County Community College for the school year 2001-2002 studying Theatre. In 2002 Fr. Max moved to Wichita where he worked in order to save money for more college. He worked first at Dillons and then Walmart (Fr. Max worked the night-shift at Walmart, and while the pay was good and the people were great, Fr. Max discovered that working nights was very difficult and now has a new appreciation for anyone who works third shift). In spring of 2003, Fr. Max applied to the diocese to be a candidate for the priesthood (a seminarian). He was accepted and then applied to and was accepted by Conception Seminary College. In the meantime Fr. Max's family moved to Mulvane KS and Fr. Max spent his summers there. He then claimed St. Michael's Mulvane as his home parish.

Fr. Max attended Conception Seminary College for three years where his favorite classes were Old Testament, philosophy and Latin. He graduated from Conception Seminary in 2006 with a Bachelor's of Arts in philosophy (he loves philosophy jokes FYI). Fr. Biltz then applied and was accepted at Kenrick Glennon Theological Seminary in St. Louis (it's actually located in a suburb, Shrewesbury, but no one knows about Shrewesbury but everyone knows St. Louis, so the Seminary puts St. Louis as its address for greater recognition). While there he specialized in Scripture, studying Hebrew for three semesters and writing his Master's Thesis on a scripture topic. His thesis was entitled The Ancient Israelite Belief in the Afterlife (Fr. Max likes to joke that his four years of serious theological studies culminated in an 80 page work on dead people). Fr. Max graduated from Kenrick in 2010 with a Masters of Arts in Theology and a Masters in Divinity. Fr. Max was ordained to the priesthood on May 29th 2010 by Bishop Michael Jackels. His first assignment was at the great parish of Blessed Sacrament where he served for his two years. His next assignment was associate pastor here at St. Francis of Assisi where he served from June 2012 until July 2015.

Fr. Max has many interests and hobbies. He is a student of martial arts (Filipino Stick-fighting specifically) which he has studied for four years. He also is a history buff and has read many books on all sorts of historical eras, wars and persons. Fr. Max also enjoys biking, walking and studying political and social philosophy (his favorite philosophers are Thomas Aquinas and Thomas Sowell). Fr. Biltz also loves meeting the families in his parish and is happy to be in a parish where there are so many. Favorite saint: Thomas Becket. Favorite book: Intellectuals and Society and Dune. Favorite food: anything grilled. Favorite drink: coffee. Favorite movie: A Man for All Seasons.