Time To Stop Kicking Can Down the Road 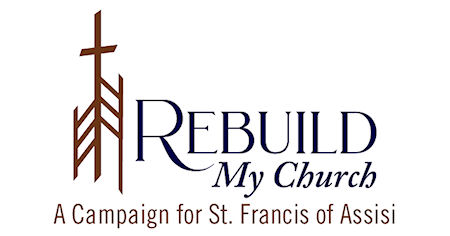 My wife, Patricia, has spent her whole life at St. Francis. She attended St. Francis School and then Bishop Carroll. Our children also all attended St. Francis and Bishop Carroll. I’m the mutt of the family, having been raised Protestant in western Kansas. I grew up on a dry land farm and ranch, and my father, like most western Kansas farmers/ranchers, had land, but not much money. He insisted all us boys know how to run a cutting torch and welder and regarded it a failure if we had to go to town to buy a new part. So, I grew up keenly aware of what it’s like to constantly battle aged equipment.

You may remember, a couple Christmases ago when the control board for the church sound system died. It wasn’t an honorable death. It was, rather, a slow, screeching, horrid death, which happened right during the Christmas season. It was awful. Turns out our sound system control board - the “sound board” - dated from the Ice Age. Okay, that’s a bit of an exaggeration. It was made during the Carter Administration, and that is NOT an exaggeration. It turns out our campus has numerous components, systems and structures of that age and older.

It’s been common after a heavy rain to be able to walk into Clare Hall and find a large pool of water on the floor. That’s fairly impressive when think about the journey that water had to make - through a commercial grade roof, through layers of insulation, snaking in and around various pipes, ventilation shafts, through a suspended ceiling and finally onto the floor.

Clare Hall isn’t unique in this regard. The roofs throughout our campus are old, and most of them in poor condition. There is a section of the school roof that has leaked so badly that during heavy rains, water runs down interior walls. We are potentially imperiling our campus structures with immense damage, not to mention the potential health risks to our teachers and children if this is allowed to persist.

Of the anticipated price tag of the projects put before the parish to consider supporting during our Rebuild My Church campign, around half of the total cost is simply to fix basic infrastructure items like roofs, HVAC, parking lots, and windows.

You might wonder how it is we find ourselves in this spot. Well, to be honest - and a bit blunt - we’re in the situation we’re in, because for many years, we’ve been kicking the can down the road. Not because we have been neglectful or poor stewards. On the contrary, we have always put people first. Over the years we have been faced with fixing infrastructure or sending more children to Bishop Carroll or enrolling students to St. Francis. The choice was always in favor of children. Or when it was to fix infrastructure or develop programs for parishioners, the choice was in favor of people.

However, we can’t kick the can down the road any farther. We need to come together as a family and fix the Lord’s house. The Boy Scouts have a famous ethic regarding camping that nearly everyone has heard before. Leave the camp site in better shape than when you found it. Can we honestly say we’re leaving St. Francis to the current and next generation better than when we found it? I don’t think we can say that now. But I think we can do it, and in fact I think we have a moral and Christian obligation to do so.

It’ll take everybody in the boat to grab an oar, but this is eminently doable. These projected costs look pretty daunting. However, if everyone pitches in and helps, and does so sacrificially, we can do this.

We can stop kicking the can down the road, and the current and next generation of parishioners will have a St. Francis campus that is better than when we found it.

Let’s rally together and get this done.