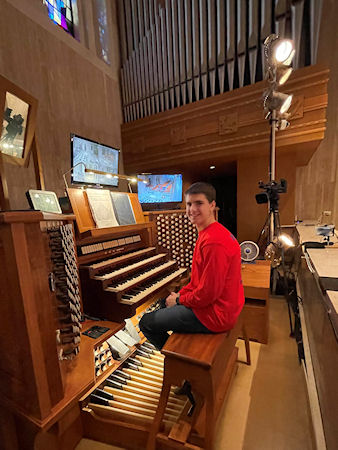 SFA parishioner and Bishop Carroll junior Elias Iseman had an "amazing experience" during this year’s March for Life. He was invited to play the organ at the Basilica of the National Shrine of the Immaculate Conception in Washington, D.C., the largest Catholic church in North America.

"The organ was so big and so loud, a lot different than playing at SFA," said Elias, who regularly plays the organ at Sunday masses at SFA. "The sound really filled the church."

He likened the difference to going from playing soccer at Bishop Carroll to playing professional soccer.

The occasion was the "Giving Thanks to God for Human Life" Mass for all the March for Life attendees from the Diocese of Wichita. It was on Thursday morning, a day ahead of the March. So, how did this come about?

"The Church needs, now more than ever, sacred music that inspires, moves and supports the mission of the Church," the bishop said. "It is this sacred music that will help each parish to be a community of missionary disciples. … We need to hear once again the organs in all our churches, that instrument that has pride of place and that has the capacity to elevate us beyond earthly realms."

At the reception following the commissioning, Fr. Gabe Greer asked Elias if he would play at the Mass in D.C. He said that Bishop Kemme thought it was important to have an organist after not having one in previous years. Elias quickly said yes at this great opportunity.

After that, Elias’s parents, Pat and Crystal, started making plans to take their entire family to the March, something they had always wanted to do. Now they had another reason. Elias traveled to D.C. on the bus with his classmates, while seven of his nine siblings made the trip in the family van with their parents and grandma. (Crystal had her own few seconds of fame when she was interviewed at the March by an EWTN reporter.)

Elias has been taking organ lessons through St. Francis since he was in the fourth grade – once a week for the past eight years. His instructor is Anna Jeter, the organist at Eastminster Presbyterian Church. To prepare for the D.C. Mass, he practiced three times at St. Mary’s Aleppo with the Yesterday’s Tomorrow choir directed by Gil Bergkamp. The choir sang at the Mass, as well as at an adoration service and a rally for the Wichita marchers.

Elias did a run-through before the Mass, and the basilica’s head organist helped by changing the sounds while Elias played. Each organ works a little differently – not like a piano – so Elias was happy for that assistance. The practice time also helped him adjust to the unique acoustics of the massive basilica.

The experience went well, and – despite a few nerves – he did a fine job, according to several attendees, and having the organ accompaniment was a beautiful addition to the Mass. Elias enjoyed compliments from some classmates, including one who was surprised to learn that he played the organ. Elias said he was happy for this opportunity to help contribute to the beauty of the Mass.