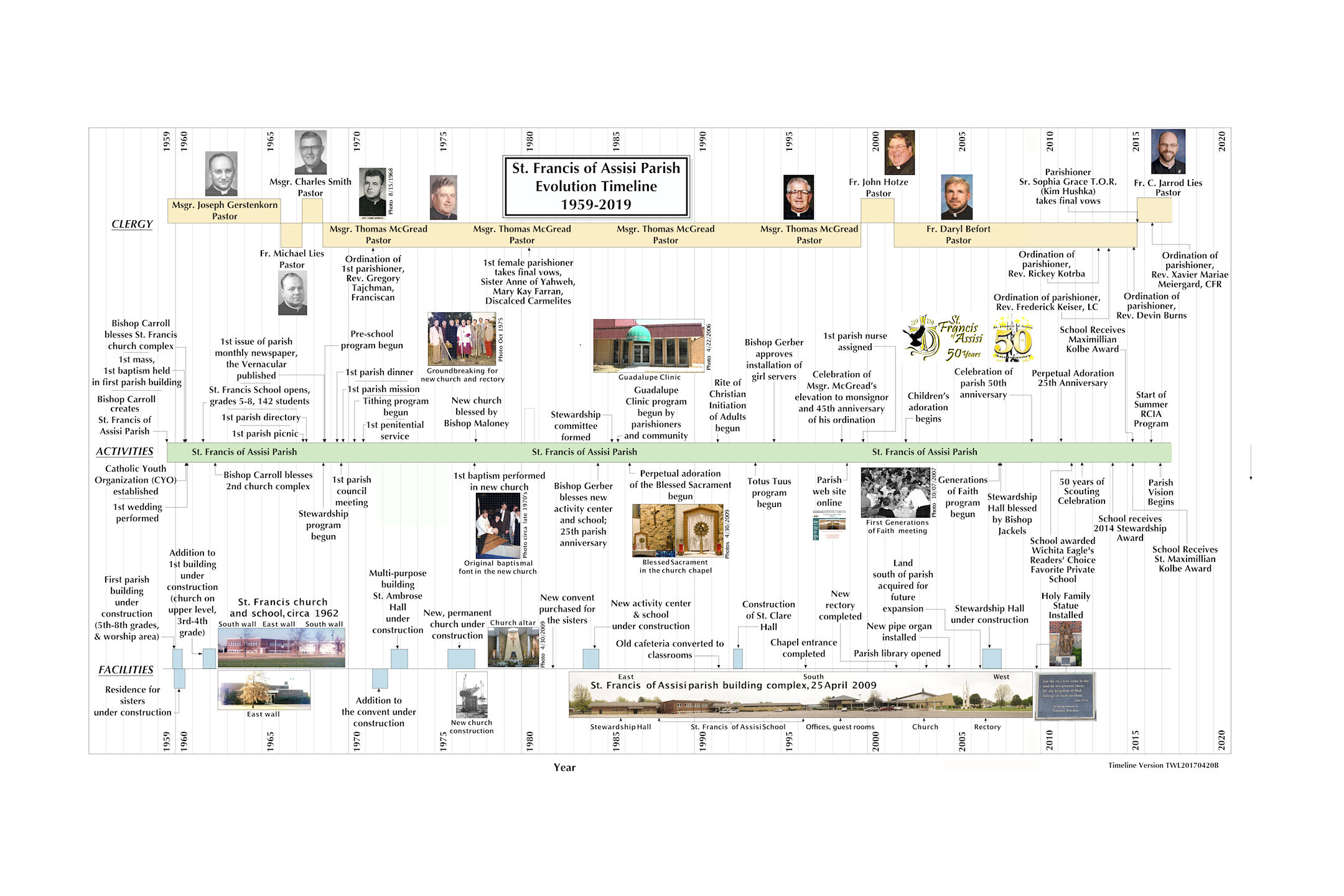 With a decree by Bishop Mark K. Carroll, St. Francis of Assisi Parish became a reality in July 1959. Rev. Msgr. Joseph J. Gerstenkorn was appointed pastor, and he took up residence in his own house, which would also serve as the rectory, 866 N. Socora Lane. Immediately after the founding, a CCD program was set up.

The first outlines of the current parish complex began a few months later as construction got under way on the first parish building. That was only the beginning.

In July 1960, the first service was held in the first parish building, and a month later, the residence for the sisters was completed.

Growth and additions were never far away. An addition to the original building was completed, and in September 1961, the school opened. Bishop Carroll blessed the second temporary church in March 1962.

Then it became time for personnel changes. Father Michael Lies took over as pastor in February 1966, and Rev. Msgr. Charles A. Smith succeeded him in July 1967. In August 1968, Father Thomas McGread was appointed pastor.

The pace of activity at the parish really picked up. The first Parish Dinner was held in May 1969, and later that summer the first meeting of the newly formed Parish Council was held. That fall, the first parish mission and the first penitential service were conducted.

The permanent Church was blessed in March 1977.

Five years later, a new convent at 8418 W. Murdock was purchased for the sisters. And, in August 1983, ground was broken for the new activity center and school. Bishop Eugene Gerber blessed the new facility in July 1984, the silver anniversary of the parish.

Perpetual Adoration of the Blessed Sacrament was begun in 1986, with approximately 800 parishioners signed up to participate.

The Rite of Christian Initiation of Adults (RCIA) began in 1990.

On June 21, 1998, a parish celebration was held to honor Father McGread on his 45th anniversary of ordination, and his being named a monsignor by His Holiness, Pope John Paul II. On October 1, 1999, Msgr. McGread retired from serving as pastor of St. Francis of Assisi to pursue his calling of presenting the Stewardship Way of Life to parishes across the nation.

Father John Hotze then served as pastor for the next 3 years from 1999 until 2002. A new rectory was constructed to give a home to up to four priests in residence.

In July 2002, Father Daryl Befort (a former SFA associate pastor) was named pastor. During this time, the parish continued to flourish. The sanctuary and confessionals were remodelled. The baptismal font was relocated and the new organ and pipes were installed. We also purchased land south of the parish complex for the school playground and for parish activities. Since we were in need of a larger building for activities and the start of preschool, Ambrose Hall was demolished. Over the next year, parishioners and Fr. Befort used their skills to build Stewardship Hall. The last change was the acquisition and the renaming of the first rectory to St. Agnes Ministry House and former rectory to St. Bonaventure Center.

The next few years St. Francis celebrated milestones and received several school awards. In 2009, we celebrated our parish's 50th Anniversary. Two years later, we celebrated the 25th anniversary of Perpetual Adoration. We also have been blessed to celebrate with six parishioners as they were ordained or professed their final vows during these 13 years.

In July of 2015, Fr. C. Jarrod Lies (who was the pastor of St. John in Clonmel and past Chaplain at Bishop Carroll High School) was assigned to be our 7th pastor. With all changes, there is thanksgiving for all that has been accomplished and excitement for what lies ahead for our parish as we continue to live the Stewardship Way of Life.