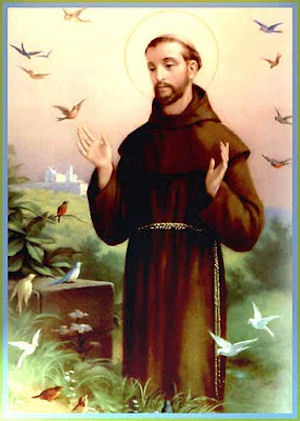 In his youth, Francis had plenty of money and spent it lavishly. He was never interested in his father's business and formal learning. He was bent on enjoying himself, but he would never refuse to give alms to the poor who asked it for the love of God.

At around 21 years old, Francis was struck down by a long and dangerous sickness. He suffered in patience such that his spirit was strengthened. After his recovery, Francis was going to join Walter de Brienni, who was fighting in southern Italy, Francis dreamt of a magnificent place filled with rich arms, which belonged to him and his army. Francis was taken ill again and he was told by a heavenly voice to return home.

Back at home, Francis gave himself much to prayer and to have a desire to sell his goods and buy the precious jewel of the gospel. Francis visited the hospitals and the sick. One day, in prayer at the Church of St. Damian, he heard a voice tell him to go and repair his house. As he was disinherited, Francis became a beggar. He helped rebuild the Church of St. Damian and another dedicated to St. Peter.

Francis gathered followers to himself and he wrote short, informal rules and sent it to Rome for the pope's approval. Pope Innocent III, after seeing in a dream Francis prop up a church which seemed ready to fall, approved the rules; but only by word of mouth and giving them a general commission to preach repentance.

Francis and his companions lived in a little cottage at Rivo Torto, outside the gates of Assisi. At the beginning of his conversion, Francis found himself assailed with violent temptations against purity that he sometimes threw himself (naked) into ditches full of snow or rolled around in a briar patch. His love for and power over animals were often commented on by those who knew him.

At Santa Maria degli Angeli, Francis and his followers underwent a time of training, poverty and brotherly love. They worked trades and in the fields of farmers for their daily bread. If there was not enough work, they would beg, but not for money. They were at the service of their neighbors, particularly lepers and others who similar sufferered. St Clare left her home in 1212 to join Francis after hearing him preach. Francis established her with other maidens at San Damiano. The women became a tower of strength and sense, an enclave garden of supportive prayer. In 1213, the lord of Chiusi put at the disposal of the Franciscans Mount Alvernia as a place of retreat.

Francis named his order the Friars Minor, that his brethren should be below their fellows and seek the last and lowest places. Francis applied his order to manual labor and to receive things necessary for life, not money. If work was not to be found the order would beg for alms. Also, they were not to preach without the bishop's permission. Many cities were anxious to have the brothers. Consequently small communities began in cities within Italy.

The members were so numerous that the order was divided into provinces. Missions extended beyond the Alps to Spain, Germany, and Hungary. In 1219, some Friars travel to Tunis and Morocco. Francis went to Egypt and Syria with the crusade. After a failed attempt to convert the Saracens, Francis returned to Italy because of an urgent message.

Two vicars had introduced certain innovations to bring the Franciscans into line with other religious orders. Francis arrived in Bologna to see that his brethren housed in a fine convent. Francis saw these events as a betrayal. He went to see Pope Honorius III and received the appointment of Cardinal Ugolino as protector and advisor to the Franciscans. He summoned a general chapter, which met at Portiunciela in 1221. Francis stressed the revised rule, which kept the importance of poverty, humbleness and evangelical freedom of the life his set before them.

Francis spent time at Grechio, in 1223, in prayer and solitude. He was careful to hide the graces which he received from God in contemplation. Brother Leo said that he had seen Francis in prayer, sometimes raised so high above the ground that he could only touch Francis' feet, if at all. The next year, at or around Holy Cross day, Francis received the miracle of the stigmata. In order to conceal the stigmata Francis hid his hands and wore stockings and shoes. By contemplating Christ naked and crucified in the presence of the poor he fostered his love of poverty. Not only physical poverty; but also interior and spiritual poverty.

The last two years of his life were years of suffering and happiness in God. As his health worsened the stigmata was a source of physical pain and weakness. His sight also began to fail. He made his last visit to St. Clair at San Damiano, where he composed the "Canticle of Brother Sun".

Francis died in Assisi at Portuncula on October 3, 1226 at the age of 44 or 45. He was buried first at the criminal's cemetery, but was moved to the Church of St. George of Assisi. Francis was canonized in 1228.

There are three branches of Friars: Friars Minor, Friars Minor Capuchin and Friars Minor Conventional. Together, the Order of St. Francis is one of the largest religious institutes in the Church today. In the opinion of Professor David Knowles that by the foundation of the brotherhood, St. Francis "did more than any other man to save medieval Church from decay and revolution".