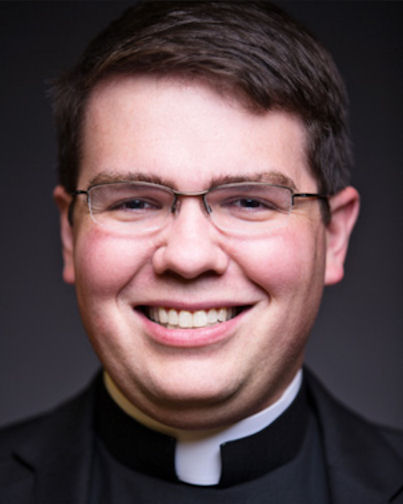 Fr. Drew was recently ordained for our Diocese and his first assignment was here at St. Francis of Assisi as parochial vicar from June 2019 until June 2021.

He grew up in Pittsburg, Kansas, in the far southeastern corner of our Diocese. His home parish was Our Lady of Lourdes and he attended the parish school from kindergarten through high school.

His parents along with most of his extended family reside in Pittsburg. He is the oldest of three boys.

His vocation was born from his experience of the Lord in high school in the context of their youth ministry program. It was in those formative years that he learned to pray and grew in relationship with Jesus Christ. The thought of priesthood and going to the seminary to further discern what God was calling him to do grew stronger throughout his years of high school.

Throughout his senior year, he found himself frequently going to adoration and pondering what he should do the coming year. As he considered all the various options on the table, the thought of further discerning priesthood in the seminary is what brought him the greatest peace.

In the fall of 2010, he began at Conception Seminary College. He spent four years there completing his studies in Philosophy. In the fall of 2014, he began his next period of studies at Kenrick Glennon Seminary in St. Louis. In the course of his time at Kenrick, he had the opportunity to do an internship year, where he spent an entire year living and working at a parish.

He spent the year here in our diocese at Church of the Magdalen. This experience proved to be pivotal in his own discernment and preparation for priesthood. He found a real love for parish life and ministry and upon completing the year was all the more energized to complete his time in seminary so that he could once more return to a parish.