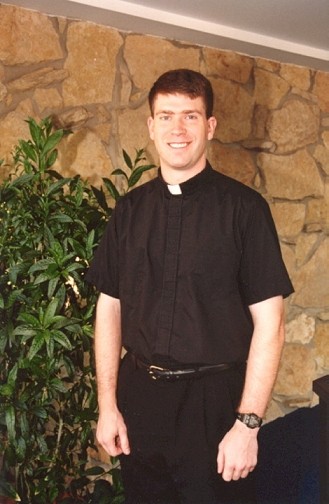 Father Jerome Spexarth entered the Immaculate Heart of Mary Seminary in Winona, Minnesota in 1994 and obtained his divinity degree from Pontifical College Josephinum in Columbus, Ohio in the spring of 2001. He was ordained in May of 2001 and his first assignment was here at St. Francis of Assisi as associate pastor from June 2001 until June 2003. Father Spexarth studied in Mexico for four months, and describes himself as "semi-fluent" in Spanish, and says he could hear a confession in Spanish, "if the person is patient." While at St. Francis, Father Spexarth was the RCIA director and made weekly communion visits to the sick and visits to hospitalized parishioners. He also served as the vocations director for the diocese, leading 6th, 7th, and 8th grade boys in monthly Saturday morning instructional/fun meetings. Later on, he became a part-time chaplin at Via Christi Medical Center in Wichita.

Father Spexarth was lead ever so gently by the Holy Spirit to his priestly vocation. It started during a hospital stay as a 16 year-old, when his feeling of loneliness and a question of God's presence was changed to one of peace after a visit from a priest. While studying engineering at Wichita State, he read "He Leadeth Me", the autobiography of Father Walter J. Ciszek. This book tells of Fr. Ciszek's 23 years in Siberian prisons and how it taught him to be utterly submissive to God's will. Reading this book gave Father Spexarth a new appreciation for priests and the Mass. His engineering studies continued, along with a nagging doubt that there was more to life. While studying in the campus library, he noticed something written on one of the bricks of the wall opposite him. It said, "Help God." Father Spexarth recounts that, "The barrier was broken and my decision was made."

Father Spexarth is grateful to be a member of the Catholic Church, what he also calls, "The One True Church." His message to you is this: "God loves you no matter what you've done or who you are and wants to extend that love through Christ's Church. If you are feeling angry, confused or curious; challenge the Faith. Study it and find out who Christ is in your life. Pray, read Holy Scripture and the Catechism of the Catholic Church."

Effective July 1, 2003, Father Spexarth was assigned as associate pastor at Our Lady of Lourdes Parish in Pittsburg, Kansas.