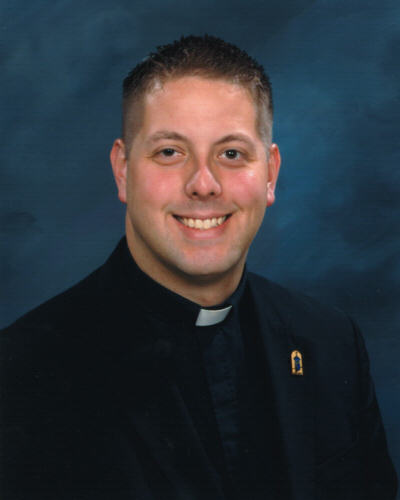 Father Matthew Marney was born March 31, 1977 in Wichita, KS to Richard and Teresa Marney. He enjoyed a Catholic upbringing including Catholic schools. He attended St. Patrick's, Wichita, St. Elizabeth Ann Seton and Bishop Carroll. He is blessed with two brothers and two sisters: Joseph, John, Patricia and Regina. Joe is married to Erin (Sullivan). They have three children, and live in Idaho. Patty is married to Paul Arnold and they have two children and live in Kingman. Gina is married to David Litton. They have one child and live in Wichita. John is attending college at K-State

After high school, Father Marney attended Kansas Newman College for two years. He worked for a year and a half and then returned to college at Franciscan University of Steubenville where he studied Computer Science and Theology. He graduated in 2002 and then entered the seminary the following fall semester at Mount Saint Mary's. He discerned his vocation while in the seminary and after five years was ordained to the priesthood on May 26th, 2007 in Wichita by Bishop Jackels, and his first assignment was here at St. Francis of Assisi as associate pastor from June 2007 until June 2009.

He looks forward to getting to know all of the parishioners at St. Francis of Assisi and working with them to build up the Kingdom.