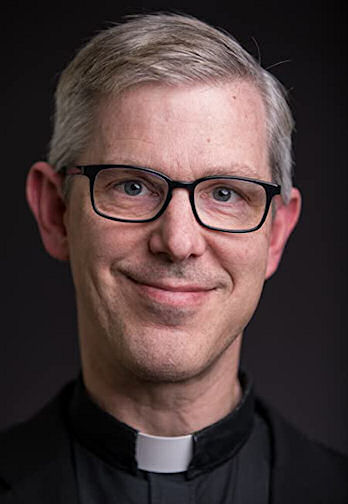 Father Thomas Hoisington was born on December 1, 1967 in Salina, Kansas. After attending Goddard schools through high school, Father Tom entered Kansas State University wanting to study math and engineering. Fortunately, that just wasn't God's plan for him. After his freshman year at K State, Father Tom entered the seminary and earned his bachelor's degree at Conception Seminary College in northwestern Missouri. He completed his graduate studies in theology at the University of St. Mary of the Lake in Mundelein, Illinois, a suburb of Chicago.

Father Tom was ordained a priest on May 27, 1995 and began his first assignment here at St. Francis of Assisi in June of that year. Within the parish, he worked directly with CYO (Catholic Youth Organization), Adult Education, the Confirmation program and PSR (Parish School Religion). His diocesan activities included serving as chaplain to the Faith and Light community, which is a segment of the Ministry with Persons with Disabilities. He, along with Father Jim Weldon, served as chaplain to the IHM sisters at Bishop Carroll High School, saying Mass for them twice a week.

What Father Tom liked most about St. Francis of Assisi parish is the respect the parishioners have for their priests and he appreciates the parishioners patience with his shortcomings. "Their own generosity in seeking to grow in holiness and in offering their lives for others is a great inspiration to me," Father Tom explained.