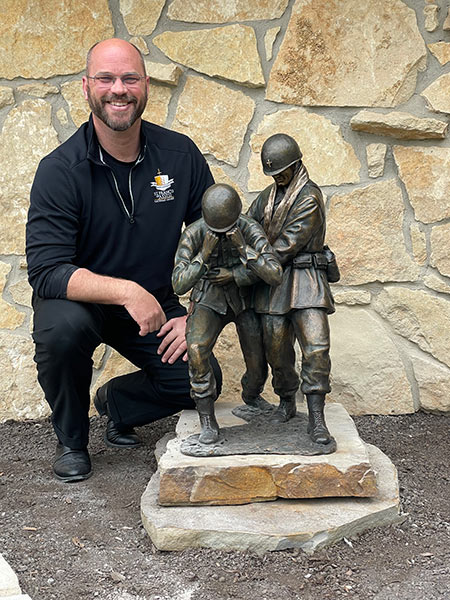 On April 20, 2021, Fr. Kapaun’s 105th birthday, Fr. Jarrod dedicated a new statue of Fr. Kapaun in a short ceremony at St. Francis. Thanks to a generous gift, our parish commissioned this statue of Servant of God Emil J. Kapaun, a priest of the Diocese of Wichita who was captured in the Korean War.

Fr. Kapaun, born in 1916, was raised in the small farming community of Pilsen, Kan. He was ordained a diocesan priest in 1940 and eventually served as chaplain for troops in World War II and the Korean War.

In 1950, while serving in the Korean War, Fr. Kapaun was captured with others from his regiment and forced into a prison camp, where he spent the last months of his life heroically serving his fellow prisoners.

Fr. Kapaun’s cause for sainthood in the Catholic Church was opened in 1993 and presented to the Congregation for Saints in Rome in 2015. Due to his life of courageous virtue and his roots in the Diocese of Wichita, Our parish chose to honor him with a bronze sculpture on the south side of the church.

Parish staff interviewed artists around the country and hired sculptor Lynn Kircher from Jaroso, Colo., in June 2020. In addition to creating more than 30 life-size statues and Stations of the Cross reliefs for more than 40 churches internationally since 1992, Kircher had previously completed commissions for the Church of the Magdalen in Wichita and St. Mary in Derby.

Once the artist was selected, the sculpting process began. After researching and studying many pictures of Fr. Kapaun, Kircher secured Army uniforms, boots, canteens, and other props. He then posed live models in costume to understand how the clothing would drape when the two figures were placed together.

Kircher produced sketches with his initial ideas for the statue. The statue came to be based on a photograph taken of Fr. Kapaun carrying a wounded soldier during their 60-mile march to a prison camp along the Chinese border.

After receiving feedback, Kircher made a clay miniature (or “maquette”) of the statue and presented pictures of it for further approval. Upon approval, he enlarged the miniatures to the actual statue height of three feet and sculpted details to make the statue more lifelike.

With final approval, the statue was sent to the foundry for casting in bronze. After casting, Kircher put the finishing touches on the sculpture and prepared it for delivery.

The statue’s completion coincided with an exciting development in Fr. Kapaun’s cause for canonization. On March 4, 2021, Fr. Kapaun’s remains were identified by a U.S. government forensic team. According to the National Catholic Register, “details regarding the transport of the priest's remains and his final resting place are now being planned by [his] family.”