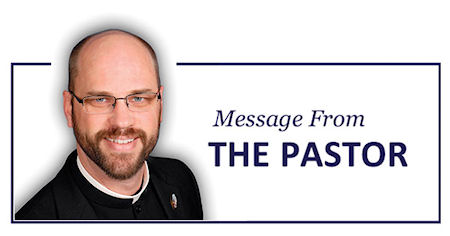 Well, unfortunately, for many this game of “mercy” characterizes what we may understand when it comes to God. For many, “mercy” from God is what happens when he so overpowers us that we have no other option but to cry out “Mercy!”

Or perhaps we think that it is only when our sins so overpower us that we have no other option but to cry out “mercy” to gain our freedom. But mercy is not a contest, nor is God some teenage boy who has to prove His power over us. Rather, mercy is a gift of God’s redeeming love that restores, heals and strengthens us.

I find a rich understanding of the concept of mercy in the Latin word used by the church: Misericordia. This word is a combination of two other Latin words: miserere, which means pity or tender concern; and cor, which means heart. So, this Latin word means “the tender concern of the heart.” God’s mercy is the outpouring of His heart out of a sincere love for His children.

For example, when my youngest brother was around five or six years old, mom and I took him roller skating. As he was skating, he fell, and his arm sprawled out in front of him. At that moment, an older skater rolled right over his arm, breaking his arm clean in two. Seeing this, mom and I ran to him. He stood up and, without crying, held his arm up, looked at mom and me and said, “It’s bent!”

My heart broke! A certain protectiveness moved out of me, and I wanted to help him in whatever way I could. For me this is the meaning of misericordia – a tender concern of the heart moving toward the one who is loved to restore, heal or strengthen.

The recent Easter Octave ending with Divine Mercy Sunday is a time rich in mercy. It is important for us to get a true understanding of this concept. Mercy is not the last option after being overpowered by either God or sin. We do not cry “mercy” because we have been pinned down. Rather, mercy is the tender concern God has for his children whereby his love pours itself out on our behalf.

We cry “mercy” because we know and are convinced that “God’s mercy endures forever” (Ps. 106), and that he “bestows mercy down to the thousandth generation” (Ex. 20:6) on his children who love him.