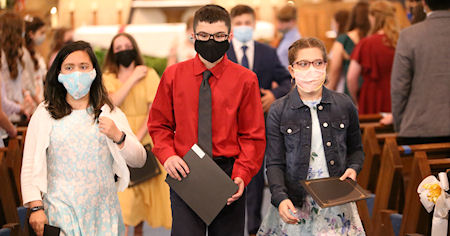 St. Francis had its annual Farewell Mass for eighth graders in May, celebrating with the 69 students listed below. We wish them well as they embark on their high school careers. Thank you to the parents, teachers, staff and special persons who supported them through their journey.

The Lord’s blessings were abundant amongst the many challenges they were faced with, especially through their final year. As the world presents adversity, Christ freely gives His grace and mercy to emerge triumphant, so that in our success we may return all glory and honor to Him.

A special congratulations to Austin Tran, who received the Msgr. Leon McNeill Eighth Grade Scholar Award, a diocesan recognition for eighth graders who are A students with no more than one B+. Congratulations also to Kirsten Nguyen, recipient of Great Reads Great Honor, and to all the names in bold, who were recipients of President’s Education Award and President’s Education Award for Achievement, which honors students whose hard work and dedication allowed them to meet high standards of excellence.